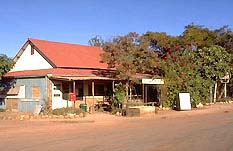 Daly Waters
A township which comprises a few houses and the very famous Daly Waters Hotel.
Even people who have never been to the Northern Territory know of the legendary Daly Waters Hotel. Today, with a population of about 23, the town of Daly Waters has little to commend it apart from its historical pub which is like no other pub you've ever seen before.

It's also easy to find, it's close to where the Carpentaria Hwy meets the Stuart Hwy. To the left, when You drive towards Darwin. 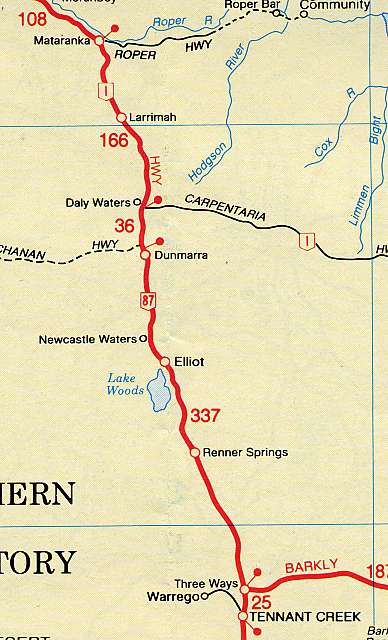 The Daly Waters Hotel
As early as 1893 a hotel, the Daly Waters Hotel, was built in the town. It is now one of the oldest buildings in the Northern Territory. The reason for the construction of the hotel was that Daly Waters was becoming an important stopover point for people travelling from the north to the south as well as for the drovers moving cattle across from the Kimberleys to Queensland. The modern pub, although little changed, is a tourist attraction. Every night there is a steak and barri (ie. Barramundi) barbeque and it boasts air–conditioned rooms.